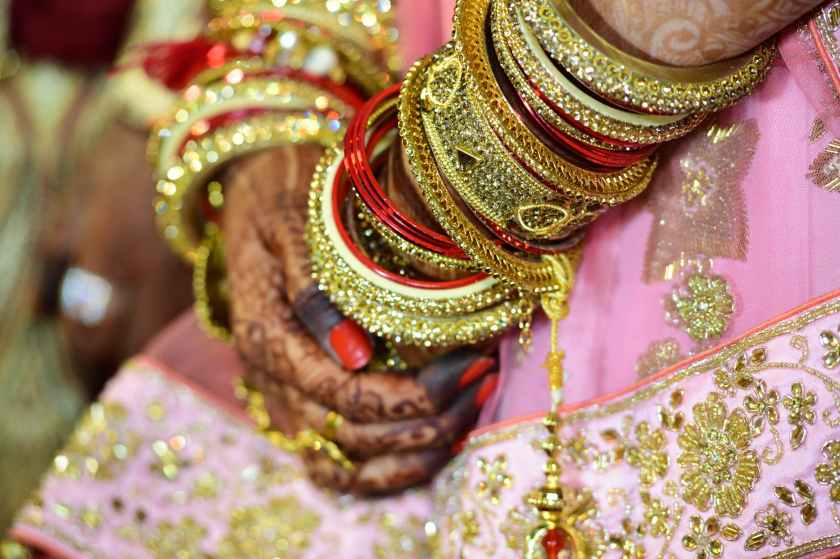 In the era of man’s ascendancy to power, the institution of marriage came into existence as an  union. No other people have endeavoured to idealize the institution of marriage as the Hindus have done. In the patriarchal society of rig vedic Hindus, marriage was considered as a sacramental union. In the hindu cutsom wife is considered to be of man and she is often referred as ardhangini. From the notion of unity of personality of husband and wife, mutual fidelity of husband and wife is implied. In the Shastra, husband and wife are referred by several names. He is known by the names such as ‘ Bhartri’ (as he is to support his wife), ‘pati’ ( because he is to protect her). On the other hand, wife is known as Jaya, because one’s own self is begotten on her.

Marriage is one of the essential samskaras for every Hindu. The Hindus conceived of marriage as a sacramental union which meant and implied that the marriage between man and woman is of religious and holy character and not a contractual union. It is obligatory for begetting a son, for discharging his debt to the ancestors and for performing religious and spiritual duties. It cannot take place without the sacred rites and ceremonies. Sacramental concept also emphasized that it is a permanent union and it is tie which once tied cannot be untied, i.e. it cannot be dissolved. It is not valid only in this life but in lives to come.

Because of its sacramental nature and not being a contract, consenting mind was not necessary and its absence for any reason was immaterial. Even if the person married was minor or even of unsound mind, and yet if the marriage tie was duly solemnised it was considered to be a valid marriage.

The Hindu Marriage Act, 1955 has reformed Hindu laws of marriage. Under the modern concept of Hindu marriage, marriage has not remained a sacramental union and has also not become a contract, it has semblance of both. It has a semblance of a contract as consent if of some importance; it has a semblance of a sacrament as in most marriages a sacramental ceremony is still necessary. Marriage confers a status of husband and wife on parties to the marriage and a status of legitimacy on children of marriage. Many of the practices such as the polygamy, polyandry, sati system, child marriage have been abolished. Apart from that there is even an added chapter on matrimonial causes[1].

In ancient Hindu law eightforms of marriage prevailed of which only three were valid before 1955. These were Brahma, Gandharva and Asura. The patrilineal was the widespread system, though matrilineal system prevailed and it it still prevails in some part of South India. The Hi calls a marriage solemnised under this act which may be performed in accordance with shastric rites and ceremonies or in accordance with the customary ceremonies prevalent in the community to which the bridegroom belongs.

Distinction between approved and unapproved marriage is no longer tenable and all marriages performed after the commencement of this act are in approved form. There are two forms of marriage prevalent in the modern Hindu society – 1. Love marriage

An arranged  marriage may be either in the Brahma form or the Asura form. Among the High caste Hindus, the Brahma marriage is most common and among the Shudras asura form is more in vouge. Hindu marriage is still a ritual ridden marriage. The ritual is dispensed only when it is not possible to perform it, such as when a love marriage takes place secretly without the participation of parents, or where one of the party is not a Hindu and therefore marriage is performed as a civil marriage.

Performance of shastric ceremonies is necessary for the solemnisation of Hindu marriage or the customary ceremonies prevailing in that caste/ community. It is contained in Griha sutras.

On the forenoon of the day when the marriage is to be performed, the father of the bride or his nearest relative, performs the vridhi sraha, i.e. offerings are made to the departed ancestors with a view to obtaining their blessings for the marriage. In the evening the bride groom comes in procession to the bride’s place where he and his party are received with great hospitality.

During the British period, it was firmly accepted that a Hindu marriage was sacrament and one of the ten necessary samskaras. Only prohibitions that were recognised were on the bases of caste, gotra, religion or blood relationship.

Example –.   A marriage between a Brahman male and Shudra female or Khastriya male with Vaishya female.

Example. – when a shudra male marries a Kshatriya woman or a Vaishya marries a Brahman woman.

During the British period the pratiloma marriages were considered invalid in all schools of Hindu law, but the anuloma were valid in Bombay, Assam and Bengal.

According to the rule of exogamy a person is not permitted to marry within the same gotra or parvara or sapindas. Two persons are gotrajas, or belong to the same gotra if they are descendants in the male line from one of the ancient sage after whose name the gotra is designated. Both the Smritis and Griha sutras prohibit sagotra marriage.

One person will be sapinda to each other –

The following rules are applied for determining sapinda relationship:

The Supreme Court held that registration of marriage falls within the ambit of the expression “vital statistics”. Therefore marriage of all citizens of India belonging to various religions should be made compulsorily registrable in the states where they are solemnised. The court has given directions to the states to comply with the same.

If no ceremony of the marriage has taken place, mere registration has no meaning. Registration will be null and void. Certificate of registration does not validate an otherwise invalid marriage.