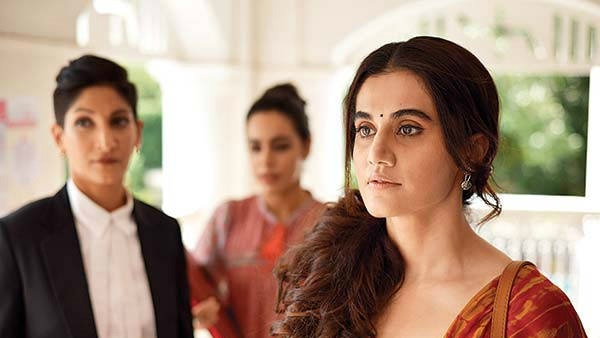 So finally after all the hype on Social Media, I decided to watch Thappad on Amazon Prime. To be frank, I found the movie very dry, slow and boring. Yes, they had to send out a message but somehow it I felt bored through the same.

The basic bottomline of the movie is, Tapsee Pannu, demands for Divorce from her husband because he slapped her in the party. She did not demand for divorce immediately. She waited for him to apologise for a few days but his way of apologising was saying that he was under stress, under influence of alcohol and therefore lost control and slapped her.

So the situation was, he was about to be promoted and sent to London. Till that day in the morning, it was confirmed but during the party he gets a message that someone else is being appointed as the head. His other Collegues and his boss are also at the party. There is a heated argument between him and his boss that is going on in the party about how he was backstabbed by the company.

Two to three men, who are his friends around him see the argument and invade and try to stop him, when he is getting aggressive. He pushes them away but does not hit anyone of them. Finally someone calls his wife and when she tries to intervene and stop the fight, he slaps her. What was shocking was what followed next. Nobody approached her or came close to her during the party. In the next scene, Tapsee is sitting in the room with her mother and her brother’s fiance. Her mother in law walks in and politely asks her to come down to the party saying log kya sochenge.

The whole attitude, that nothing is wrong between them and they can move on further is what is most frustrating. But I do not find him at fault. Not considering Emotional Requirement of a fellow human being is something that we are not taught at all. Neither does our education system teach that nor does our family.

Let us presume if he had another friend or collegue instead of his wife, he would have immediately apologised. Because he understands the Male Ego not the emotion behind the same. The movie showed lack of empathy, but that is something that we as a society lack in general, because we do not like to talk about the same.

The movie gives out a very wrong message that Divorce is the solution to lack of empathy. The reality that none of our movies show is the role that marriage counsellors play in the marriage. I am sharing a personal case here.

When I was working with the District Legal Aid Services for Family Court, I had got a matter. The Couple had been married for about 12 to 13 years and the they had a 11 year old daughter. The husband had filed for divorce and the wife never replied to any allegations but appeared in every hearing and politely put her stand. The husband had filed the case under the influence of his family members, which he later confessed. They were living together just like any happy parents, with their daughter, no day to day fights but still this case was going on in court.

Unlike, how they show in movies, we lawyers do not encourage divorce in real life, atleast the good ones do not. But sometimes, when conditions that are that bad and there is no other solution other than Divorce, we proceed with the same legally.

The movie could have beautifully shown, how marriage counselling could have helped them understand. Today Divorce is increasing manifold in our society because the stigma related to the same is reducing in our society. There is a minor difference between lack of communication and Domestic Emotional Abuse. A lot of marriage actually break due to lack of communication and understanding in which there is a fault of the couple, their parents, society, peer groups etc. Unfortunately, today in social media marriage is all about wearing twinning clothes and showing it off to the world. But have we ever thought of twinning our thoughts or respecting the difference of thoughts. No,never did we think about the same.

Somehow, I felt the movie could have been made much better, with the wonderful star cast that it had. Her mother, mother-in-law, her father, brother, brother’s fiance, everyone was simply too good in their roles.

Yes, marriage is a huge gamble, which works for some, which does not work for some. Some people even with little amount manage to live happily and some despite hitting a jackpot are unable to survive more than a few years.

2 thoughts on “When a Thappad put me to sleep”