It is high time, that we talk about the most often rather conveniently ignored topic in our society, Men’s Right. Just because our society is patriarchial in nature we feel that we do not need any specific laws to protect men. Unfortunately, you and I are both aware that the powerful always have access to law and therefore a lot of laws in India are mostly misused.

For Example:- Section 498 A is one of the most misused law in our Country as only the rich have utilised this provision and unfortunately, the genuine cases are left out.

Well this is a topic of endless debate, but the topic of this interview today with Mr. Amit Deshpande, founder of Vaastav Foundation to enlighten us about Men’s right in India.

Tell us how did you start Vaastav and what was the idea behind it ?

False cases of dowry demand had been increasing and with advent of internet a Yahoo group ‘Misuse Dowry Act’ was created in 2004 by few people. People from all over would converge on the group and share experiences, devise strategies in their individual cases. The recognition of a need for Men’s movement was felt to tackle issues beyond matrimonial cases and a Yahoo group called as Save Indian Family was created in 2005. This turned out as a watershed moment in the history of men’s movement in India. People began to conduct weekly meetings offline in their respective cities. Eventually such groups registered as NGOs. Mumbai had meetings going on in Borivli under the name Indian Family Foundation and as Protect Indian Family Foundation in Mulund. There also was MASHAAL, our women’s wing led by women who supported idea of men’s rights movement. Vaastav Foundation was started in 2014 as a registered NGO, which brought all these existing NGOs under one banner. Currently we conduct meetings in Borivli, Mulund and Navi Mumbai with about 150 people being supported every week. We work to highlight issues of men’s health, boy’s education, harmful effects of stereotyping of men, etc.

Our society does not consider men as Human Beings but just as a machine how can we change the same?

Our society has been modelled on the traditional system which is called as patriarchal or can also be called as gynocentric. It stereotypes men as protectors and providers. A man’s worth is decided based upon his ability to protect and provide. In this situation, a lot of awareness would have to be created about how the traditional stereotypes harm men. Men need to be educated first about how they are at a disadvantage under the system which sees them as protectors/ providers.

To what extent has patriarchy damaged men ?

A man is supposed to be all powerful and stoic in all situations. In the movie 10000 BC, the leader of the tribe is not supposed to laugh or smile, he is not allowed to show any emotions. If he laughs he is not considered serious enough for his post and if he cries he is considered weak.

Men can exhibit signs of laughter now without being judged to some extent, but the simple emotion of crying is still associated with weakness and that dehumanises men.

When men can’t express weakness or share their feelings, they are sucked into depression and many a times commit suicide. Every 7 mins a man commits suicide in India. Every year 90000 men commit suicide out of which 65000 are married men, while 30000 women commit suicide. This is a very high cost of patriarchy that men are paying.

Men die more due to stress related diseases, they die more in accidents, industrial deaths, combat deaths, etc; This reflects the fact that men are exposed more to risks and their role as protectors and providers is a very stark reason for this.

How is peer pressure damaging the mental health of men in our society ?

The race to excel as providers is a result of the stereotypes dragging men since eons. The gradation of men that happens as providers, pushes them to keep achieving more. This stresses men out and results in many mental health issues. India leads the world in number of suicides and it has risen 4 times in the last 50 years. Stress related diseases like cardiac arrests, diabetes are found more in men. So pressure to perform isn’t just limited to mental health issues of men.

How do we educate men about standing up for their rights instead of the usual mindset, that they are strong and so they need to deal with the situation?

Men need to be made to understand the concept of misandry. Men would know what misogyny is, but not it’s analogous term misandry. Anything that binds men as protectors and providers is misandry, anything that makes them compete other men purely to prove their machoism is misandry. It is misandry to ask a boy not to cry like a girl. Anything that dehumanises a man, is misandry.

From a legal perspective, men should be given same rights as women to file cases of domestic violence, stalking, molestation, rape and sexual harassment. Men aren’t educated to recognise instances of they being violated or abused. Even if they get affected, they are trained to cloak it under garb of machismo.

What are the few toxic notions that you wish that our society breaks ?

Society needs to look at men as being beyond a walking wallet, ATM or their means of livelihood or for their machismo only. The egregious mockery of men facing domestic violence needs to stop. The celebratory connotations to men as being lucky when they share about they being sexually violated by a woman must cease. Men should be encouraged to speak up about their issues. We do not talk enough about Prostate cancer although almost a third of the men above 60 are supposed to have been suffering from it.

Why is it important for men to express their emotions ?

Men are taught to be macho and seeking any help is seen as a sign of weakness. They are known to get into a man cave, where they shut themselves up until they find a solution on their own. Men need to express themselves, so that during times of distress they could seek help, instead of slipping down spirally into depression and sometimes taking the extreme step. If a simple sharing of issues could save lives, it should be encouraged, most importantly without branding them as weak or useless. Overall, they should express themselves as it would prevent their dehumanisation.

How can we train our boys and girls that relationships are not meant to be toxic so that tomorrow there are no cases of domestic violence against men ?

Either there can be equality in both rights and responsibilities or none at all. The advent of radical third wave feminism has peculiarly brought in a sense of entitlement among women without making them accountable to their traditional role of caretakers. Male traditional roles still remain intact while a woman can choose to be a caretaker or a provider. Further, she can choose to be a contributor or not, completely by her choice. As per Protection of Women against Domestic Violence law, even name calling by a husband against his wife is treated as violence. Such skewed understanding of the roles played in a domestic set up and the lopsided laws do not encourage harmony.

The idea that women were oppressed under patriarchy and men had it all in a platter needs to be thrown out completely. Most false cases of domestic violence, emerge from a sense of victimhood by the woman, wherein some woman feel even a basic life skill such as cooking for the family is oppression. A relationship or family cannot have room for complete individuality.

Youngsters need to understand their partners limitations as humans.

What are the laws that need to be changed immediately with respect to Men’s rights ?

As described earlier, the notion that men do not need laws against molestation, domestic violence, rape, stalking, sexual harassment needs to be defeated. Laws should be made gender neutral and anyone found misusing the laws should be given stringent punishment. Perjury laws need to be strengthened. Judiciary should stop treating women with kid gloves in terms of crimes and punishment.

The idea that bail can be considered to a woman purely because of her gender is preposterous in a society that seeks gender equality. Unless the law is designed to treat both genders equally, equality cannot be established.

What role can corporates play in empowering men ? Considering the recent #Metoo Movement?

About the #MeToo movement, I would say it lost its way when women were encouraged to name and shame men without being held accountable for their allegations. It became a tool for vicious manoeuvres in office politics. Many a times, men lost their reputation and livelihood, in some cases they gave up their lives horrified over false allegations. Such irresponsible behaviour with such serious allegations affected both the genders eventually. Men began staying away from women and it not only vitiated the corporate office atmosphere, but also resulted in women being disadvantaged by limited exposure within office circles.

Corporates should discourage any such hit-and-run style allegations and work to bring accountability from the people alleging harassment. Most corporates are terrified of such instances and first thing they do is fire the employee accused of misdemeanour. This is harmful for the office culture in the long run. Men should be careful about their interactions with women and understand that technology is their friend in face of false allegations. Many cases have been exposed due to audio/video recordings, men should be armed all the times. Unfortunately, such is the level of hostility now.

Your message to the society.

Men’s rights as a subject is neither for nor against any gender. If anything, it furthers the notion of equality and helps to maintain the balance in society. If any man comes up with any issue of distress, people should give him a patient hearing, encourage him to share and not mock him as being weak for not being able to handle a situation.

Judiciary needs to treat men fairly in cases of matrimonial dispute, child custody and rape charges over false pretext of marriage. Men feel they always get the shorter end of stick in these circumstances.

On the health front, men should not neglect their physical as well as mental health. Every man above the age of 45 years should get an annual prostate check up.

Above all, people should celebrate Men’s Day on 19th November, which would help to highlight all such issues about men.

Vaastav Foundation is an NGO that fights for Men’s Rights across India.

In case if you know any man who is being oppressed or needs help you can contact them in the following ways.

The Copyright to this article belongs exclusively to Ms. Aishwarya Sandeep. Any reproduction of the same will invite appropriate legal actions under the Indian Laws, subject to Mumbai Jurisdiction.

Do you know about all genders ?

How I managed Social Media Break? 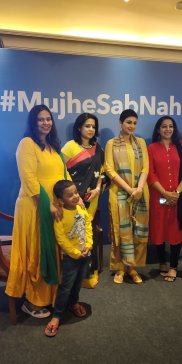